5 Reasons Why You Should Avoid Sleeping Late at Night 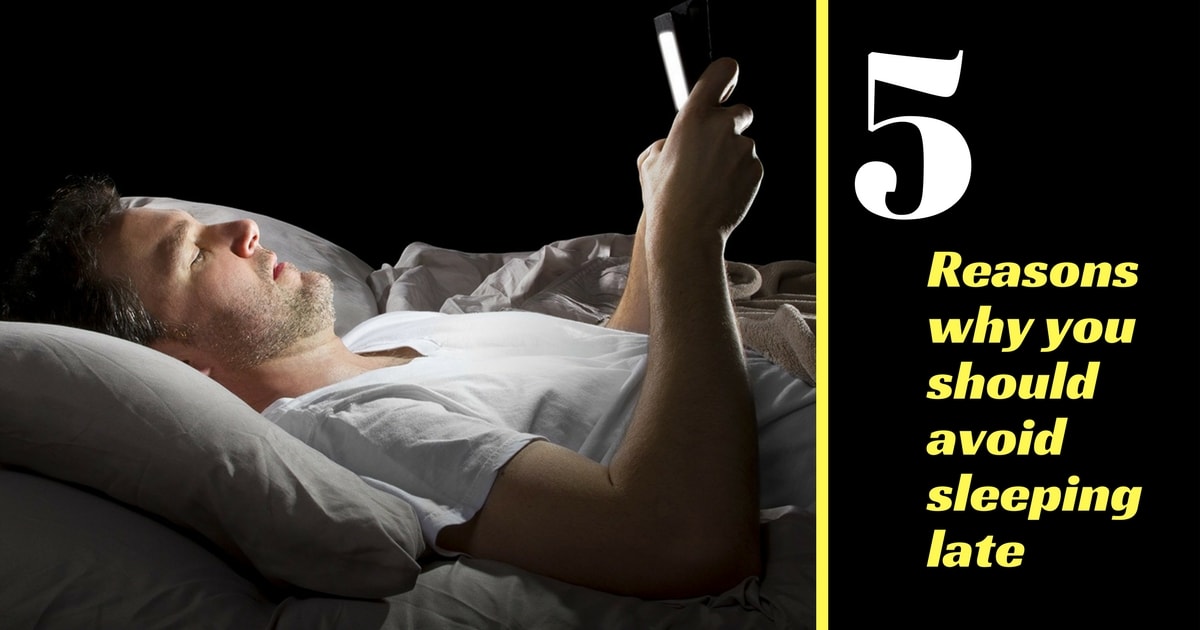 It is not just about the new generation which loves to stay awake till the late night. Young people as well as those working till late in their offices get to make the habit of sleeping late at night. As a result, it becomes hard for them to wake up early in the morning. But staying in your bed, sleeping till late hours in the morning is absolutely not a good habit. If you are following such a habit in your life and still going about boasting, you need to know its negative effect on your health.

The habit of sleeping late does not just increase the risk of a number of health problems and diseases, but also affects your life in its normal flow and routine. Once you will find yourself moving off from the ideal way to live life, you will find the stress level and anxiety increased with time. In general, both physical and mental health gets affected with this habit of sleeping late. Want to lead a better life? Here are five reasons why you should avoid sleeping late in the night and why it is mandatory to get rid of this habit.

When you sleep late, you will obviously wake up late. Often, sleeping beyond what people consider permissible wake up time causes mood swings. Such people often get upset easily and feel irritated at things that do not happen as a result of the lost time due to sleeping. Also, it has been found to affect the ability of your mind to concentrate. The reason why children are not
supposed to stay awake till late night is because of the loss of concentration it causes. So, it is advised to live a planned routine life and take measures to sleep early to wake up early.

(2) Pain in the body including head and back

The habit of sleeping late has its effect on the mind as well as it cannot get the required proper rest. This can also result in sudden headaches which occur more frequently. Physical strength of the body also gets affected, especially of lower back. People who sleep late night also complained of regular pain on their back which occurs more in the night.

People who prefer to sleep longer in the day time usually skip the first meal of the day which increases food cravings in the working hours. In modern lifestyle, it results in over consumption of unhealthy food like pizzas, burgers and all that can be easily made available. The related effect on the quality of food consumed weakens the digestive system alongside besides increasing the level of unhealthy fat in the body. Also when you are awake till late night, you tend to feel hungrier and invariably look out for food in the refrigerator well past dinner.

(4) Unattractive Face With Spots and Circles

Unhealthy sleep is the reason behind unappealing, less confident smile and eyes. In women, dark circles near their eyes mar their beautiful face and make them look unattractive. Working late night definitely causes dark circles around your eyes.

To lead a healthy life, it is important to keep a check on the habit of sleeping late night. Sleeping early and getting up early ensures better quality of life.